The enormous park with a boundary several blocks away from where I live is full of antique faces.

The forest of Vancouver’s Pacific Spirit Regional Park is populated mostly by young trees ranging from a day to a little over a century old. Yet the woods are punctuated here and there with stumps of stupendous girth, whose diameters can range 2–3 meters. Check out the online Vancouver Big Tree Hiking Guide, which calls them “super stumps,” for a helpful history. How splendid these western red cedars must have been over their several centuries of life (the species can live 1,000 years), until the lumberjacks of the 1890s sawed them down to make room for development and produce the lumber with which this city was built.

The lumberjacks made indents on these stumps where they’d insert planks that they could stand on while they sawed. Remaining today, the indents often appear to take the form of eyes, of noses, of mouths. I’ve seen round stones placed in them, simulating eyeballs. You meet these faces as you walk by on the trails of the forest, which has partly regrown around the stumps in the years since the cuts. In these faces, the souls of the trees seem to merge with those of the men who logged them: old-growth spirits lingering amid busy second-growth regeneration.

The stumps themselves will last a good long while yet. It’s estimated that the wood of fallen western red cedar remains sound and reusable for 100 years. Today the stumps help fuel regrowth around them.

Despite the centrality of logging history to the entire Pacific Northwest, the stumps of these giants and the traces lumberjacks made on them are left there in Pacific Spirit and many other parks unceremoniously, without interpretive signs or commemorative plaques. If you want the kids to know what they are – to witness this particular interplay of human and natural heritage – you have to explain. It’s as if the stumps with wedged faces were simply part of the natural course of things, rather than half-cultural artifacts in themselves.

It’s interesting, for example, that the term “culturally modified trees” (or CMTs) appears to refer exclusively to trees altered by indigenous use. From what I can tell, there doesn’t appear to be a term recognizing the historical imprint left on trees by early loggers. (If I’m wrong and there is one, please comment on this post, since I’d love to know.)

Indeed, one of the main characteristics that make our city’s fast-disappearing Craftsman-era houses so fine is the use of the enormous planks afforded by these old-growth forests. Such materials are unavailable today, making the houses irreplaceable. Vancouver’s rage for demolition and redevelopment, about which I’ve recently written and spoken on the radio, dishonors not only our built heritage but also the historical memory of the grand forests that enabled this architecture and of the people who worked in dangerous conditions to provide these resources.

As testaments to the way human economic activity leaves historical imprints upon the environment, the logger-marked stumps marking younger woods remind me of the stone walls left by the New England farmers of the mid-18th and early 19th centuries. To this day, these walls lace ubiquitously through the regrown forests and private properties in the small towns of that now substantially post-agrarian (and post-industrial) region.

Originally, the stone walls formed when deforestation by settlers triggered colder soil temperatures, which in turn caused rocks to heave up out of the ground, and the farmers piled them at the outskirts of their arable lands to get them out of the way. (Here’s a really interesting description of that.) 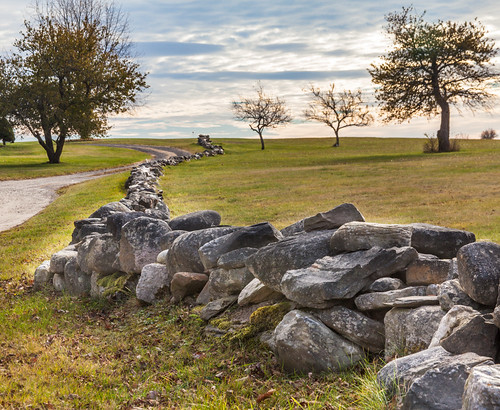 There’s a wall like this submerged two to three feet under the surface of the small lake in Danbury, Connecticut where my grandparents lived while they were alive. In the 1920s or after, the site was transformed from pasture to reservoir by damming, then was abandoned as such and named Tarrywile Pond, later upgraded to Tarrywile Lake. Eventually this little lake became conserved as part of the larger Tarrywile Park, bought by the city as a parcel in 1985. (The park includes both the meticulously maintained Tarrywile Mansion and the much less maintained Hearthstone Castle across the road, both dating from the robber baron era, which locals simply call “the Mansion” and “the Castle.”)

Over three generations, our family used to swim from my grandparents’ garden to the forested hill across Tarrywile Lake, considering that we had reached destination once we were able to settle on the stone wall as it came into view underwater two to three meters from shore. Replaying the archaeology of finding the marks left by early New Englanders on the landscape felt to me like a reward for the exercise of our swim, as we’d pause to sit on the wall for a rest before returning across the lake. 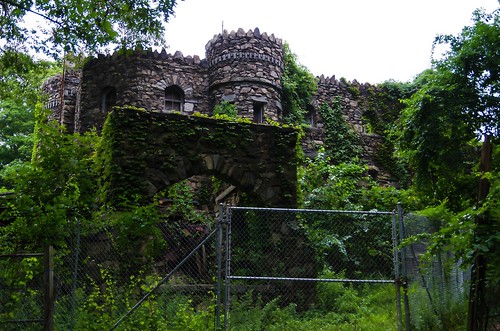 I love examples of accidental heritage, where people of long ago left records of their lives and economic activities on the landscape, without necessarily intending them that way. Are there examples that you value in your area? Please tell us in the comments!

With thanks to Janet Turk Wittes for her help in informing the history of the Tarrywile Lake site.