If you’ve walked the Arbutus Greenway lately, you’ve probably noticed that the temporary pathway is all paved now. Every time I go on it, it seems busy with both pedestrian and cyclist traffic.

Time for an update.

From January 18 to February 15, the city ran an extensive public consultation gathering feedback on what people wanted from the greenway in its final form. The results are now in, and a comprehensive summary and short video are posted online.

The city also issued an RFP for consultants bidding on engineering, landscaping and other work associated with the permanent path. The RFP, which reflected the results of the public consultation, closed on April 4.

So what’s the upshot?

In the January–February consultation, the city asked residents for input on what would most entice them to use the greenway. Stakeholders, members of the public and city advisory committees were all involved in this process of articulating values.

The city held online Talk Vancouver and paper questionnaires, three stakeholder meetings (of which I participated in the second, “Transportation and urban design”), three public open houses, three “Pop-Up City Hall” events, a Reddit “Ask Me Anything” and meetings with four of the city’s advisory committees. The city reports more than 4,000 interactions with participants through these activities, including almost 3,000 responses to questionnaires.

The results are in. As reported by the city, the public wants the greenway to: 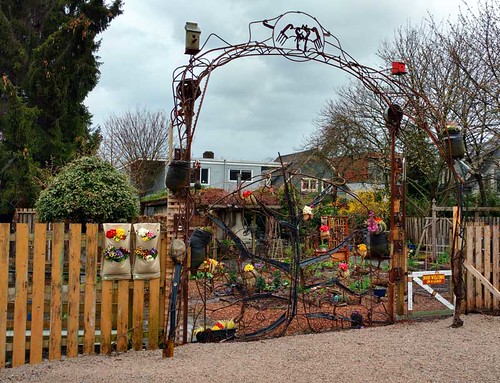 Consensus was strong, evidently, on the points above. The overwhelming majority of participants expressed interest in using the greenway for walking, cycling and/or enjoying nature. Such being the case, it’s unsurprising that reactions toward a future streetcar were somewhat divergent. While some looked favourably upon the prospect, others questioned its necessity or expressed concern that having a streetcar could detract from non-motorized uses. This ambivalence toward streetcar use – and indeed to the corridor’s overall designation as a transportation corridor rather than a green trail – was consistent with the ambivalence on this point that other advocates and I have observed in past meetings as well.

Interestingly, a number of respondents referred to the New York High Line and expressed a desire to see something similar built here.

Though paved, the temporary path is still under construction. In a newsletter, the City has announced that the following improvements will be made in the coming months:

Since the first two of these points have serious safety implications, they should be treated as pressing. With regard to separations, I’ve had feedback from pedestrians who feel threatened by the speed of bikes and have expressed apprehension that the final design could privilege cyclists over pedestrians by giving them more room. Clearly, the sooner the separations are indicated, the better.

As I’ve argued elsewhere, the lack of clarity at street crossings is an accident waiting to happen, and I’m not sure what scope is implied by “minor improvements.” I reiterate my hope that the city will hasten to provide obvious priority for greenway users. Many drivers either disregard the greenway or seem unaware that it’s even there. At the intersection with 6th, for example, I noticed recently that cars were parked across it: 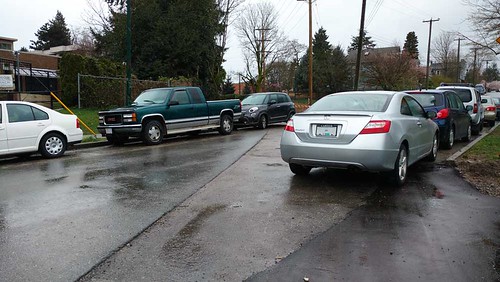 Toward a permanent design

Meanwhile, the city is moving ahead with developing a permanent design.

Throughout the RFP, there’s a strong emphasis on transportation as a fundamental component of the greenway’s identity. Beyond that, I’m pleased to see that the values expressed at the consultation figure explicitly in the RFP’s emphasis on accessible use and safety, community connectivity, amenities, focus on ecology, placemaking opportunities and integration of cultural and heritage elements.

For example, I’m pleased that the RFP places explicit value on attending to neighbourhood variety: “Early discussions with stakeholders and the public have indicated a desire to reflect the distinct character of each neighbourhood along the greenway. With such a long and linear site, one of the design challenges will be the development of features and elements that can maintain a coherent experience within the physical confines of the entire greenway while allowing for uniqueness within distinct sections of the corridor” (p B-9). 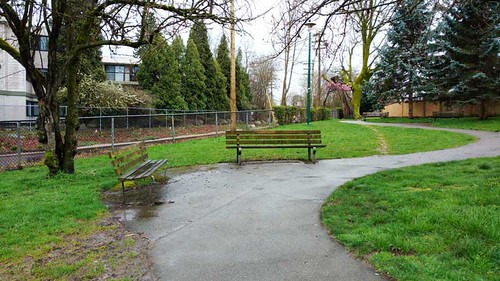 Paved now, the Arbutus Greenway retains echoes of its railway past with its track-like quality, running behind the little park at 6th. Photo: Naomi Reichstein

According to the city, various design options will be developed over the summer, and the public will receive further communications in the fall. After seeking public review and evaluation of these options, the city will provide a detailed update on the one preferred.

I’ll pass on what I hear, and I’ll continue to advocate with the city for the greenway’s design, so please feel free to get in touch with me if you have any feedback about it.

One thought on “The Arbutus Greenway: What the public said and what’s happening next”